‘In the old days you used to spend all day on the phone but now it works out that I spend half the time in the office and half on the road with tours.

In the office I mainly spend the day on the computer organizing shows and fighting with agents over sensible fees – there is a lot of competition now.

I’m possibly the only promoter here that hires for Spain and we deal directly with the main agencies in Britain, USA, Sweden, Germany and some other countries’. 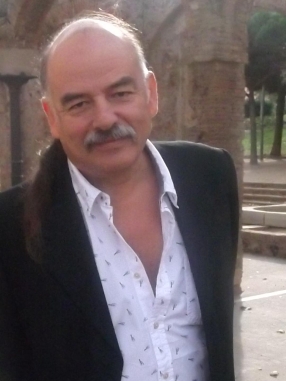 Robert got in touch after reading the interview with former Tygers of Pan Tang vocalist Jon Deverill (22nd January 2019). I asked Rob what can he remember of the Tygers tour……

It was very early days for me as a promoter but I can remember the Tygers perfectly. The tour was in 1985, they were a great band and very nice people.

We walked around Barcelona and I went up the hundreds of steps of the Sagrada Familia Cathedral, Jon was the only member that came up with me!

You are based in Barcelona, Spain, how long have you been there and did you work in the UK before that ?

Yeah, I’ve been in Spain since 1983, before that I worked in the UK as a corresponder for music magazines.

What was the intitial spark that created your interest in promoting gigs ?

I just love live shows and seemed good at organizing gigs, I wanted to be a promoter since I was 14-year-old. My heroes were UK promoters in the ‘70s like John Curd, Mel Bush and Harvey Goldsmith.

Looking through the impressive list of bands that you have worked with I notice there is a lot of goth rock bands – The Mission, Lords of the New Church, March Violets – plus heavy metal – all bands I saw in Newcastle during the ‘80s – can you remember dealing with any of them ?

Yes, I still work with The Mission and have done for the last 40 years. Wayne (Hussey, lead guitar & vocals) has been a friend for many years and I’m always happy to work with him.

I am in touch and still friends with many of the bands from the ‘80s. I have really fond memories of then – great times. Unfortunately some bands have disappeared or I’ve lost touch with them.

Being from South Shields in the North East I noticed you promoted the Angelic Upstarts who started from here….

Wow! Yeah, Mensi that brings back memories! I promoted a lot of punk gigs, like Chelsea, UK Subs, Exploited, Anti-Nowhere League, 999, and many, many more.

Now with over 30 year experience in the business we produce and organize all sorts of musical events and work with diverse acts from Jazz, Blues, Rock, Pop, Funk and Soul, and always internationally renowned groups.

What are you doing now regarding the corona virus problem ?

Nothing at all, my last show was The Mission in March 2020, and possibly my next show will be The Mission in 2021. It’s really awful being a promoter right now, it’s the worst profession because of what’s happened, in fact all the music business is at one big standstill.