‘In the old days you used to spend all day on the phone but now it works out that I spend half the time in the office and half on the road with tours. In the office I mainly spend the day on the computer organizing shows and fighting with agents over sensible fees – there is a lot of competition now.

I’m possibly the only promoter here that hires for Spain and we deal directly with the main agencies in Britain, USA, Sweden, Germany and some other countries’.

Robert got in touch after reading the interview with former Tygers of Pan Tang vocalist Jon Deverill (22nd January 2019). I asked Rob what can he remember of the Tygers tour…… It was very early days for me as a promoter but I can remember the Tygers perfectly. The tour was in 1985, they were a great band and very nice people. We walked around Barcelona and I went up the hundreds of steps of the Sagrada Familia Cathedral, Jon was the only member that came up with me!

You are based in Barcelona, Spain, how long have you been there and did you work in the UK before that ? Yeah I’ve been in Spain since 1983, before that I worked in the UK as a corresponder for music magazines.

What was the intitial spark that created your interest in promoting gigs ? I just love live shows and seemed good at organizing gigs, I wanted to be a promoter since I was 14 year old. My heroes were UK promoters in the ‘70s like John Curd, Mel Bush and Harvey Goldsmith.

Looking through the impressive list of bands that you have worked with I notice there is a lot of goth rock bands – The Mission, Lords of the New Church, March Violets – plus heavy metal – all bands I saw in Newcastle during the ‘80s – can you remember dealing with any of them ?

Yes, I still work with The Mission and have done for the last 40 years. Wayne (Hussey, lead guitar & vocals) has been a friend for many years and I’m always happy to work with him. I am in touch and still friends with many of the bands from the ‘80s. I have really fond memories of then – great times. Unfortunately some bands have disappeared or I’ve lost touch with them.

Being from South Shields in the North East I noticed you promoted the Angelic Upstarts who started from here….Wow! Yeah, Mensi that brings back memories! I promoted a lot of punk gigs, like Chelsea, UK Subs, Exploited, Anti-Nowhere League, 999, and many, many more.

Now with over 30 year experience in the business we produce and organize all sorts of musical events and work with diverse acts from Jazz, Blues, Rock, Pop, Funk and Soul, and always internationally renowned groups.

What are you doing now regarding the corona virus problem ? Nothing at all, my last show was The Mission in March 2020, and possibly my next show will be The Mission in 2021. It’s really awful being a promoter right now, it’s the worst profession because of what’s happened, in fact all the music business is at one big standstill. 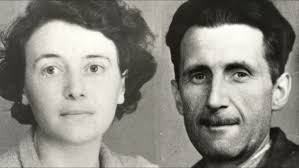 First came across the Spanish Civil War in 2012 when I was researching South Shields born Eileen O’Shaughnessy, who was married to writer George Orwell.

The couple spent some time in Barcelona during the civil war. Orwell went ahead earlier than Eileen to write a story, but ended up joining the militia in their fight against fascism – you could say he replaced his pen for a gun.

Below is a photograph taken on the front line of the war, with Orwell the largest figure at the back and his wife Eileen crouching behind the machine gun. In an earlier post I talked about a documentary that I made (Wildflower 2014), and when I first saw this photograph how it was the catalyst in making the film.

In the documentary I wanted to include this part of their life together, so contacted Alan Warren. Alan was living in Barcelona, and with the organisation Porta de la Historia, they have researched the Spanish Civil War and Orwell.

I took a flight out to Barcelona and stayed for a few days in a hotel in the Gothic area of the city. We met up in a café on Las Ramblas and talked about how we could tell this part of Eileen’s story.

Next day Alan guided me to the locations Orwell wrote about in Homage to Catalonia, an account of his personal experiences during the civil war. Through research we came across letters written by Eileen when she was in Barcelona.

She mentioned going to a restaurant, Los Caracoles, just off Las Ramblas. We went there and after some negotiation in Spanish by Alan, with owner Aurora Bofarull, I filmed a short sequence to include in the documentary – we also got a free meal of eggs and peppers.

Alan told me about the group he is working with …..Porta de la Historia (PdlH) is a group of historians and enthusiasts based in Spain and Catalonia who are interested in the hidden history of the Spanish Civil War 1936-39, and the 35,000 men and women from 52 different countries who came to support the Spanish Republic, many of whom served in the International Brigades.

For over ten years PdlH has conducted extensive Field Research and study of the many first hand accounts to allow the hidden landscape, of not just the battles, but also places in the rear guard and hospitals, to come alive.

Standing at the same spot described by an International brigader over eighty years ago is an experience to be treasured. In addition, the use of cameras during the War, by the likes of Robert Capa and Gerda Taro has allowed many locations to be identified. 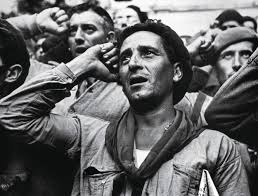 More importantly, local contacts and knowledge allows visitors to see parts of Spain that are rarely visited by tourists. It is, to a certain extent, the real Spain.

Apart from many bespoke tours for one to four people, larger school trips are also offered. In addition, film and documentary work is common, as well as editorial advice for historians.

The Field of Research is large. It is said that more books have been written about the Spanish Civil War than World War Two. It has been called ‘The Last Crusade’ and ‘The first Battle of World War Two’.

The passion, romanticism, beliefs and idealism of both sides is also full of violence, hate and bloody revenge. A polarising event of such tragedy that even now many families will not talk about it.

However, Porta de la Historia is slowly allowing this subject to be addressed more openly. And hopefully the distance between now and then, as well as some government support, is allowing grandchildren and great grandchildren to try and understand the conflict that tore Spain apart. A nation that forgets it’s history is condemned to repeat it.

This work is a pleasure and a responsibility. Having known many International brigaders in later life, it is important to explain and try to understand this period objectively and factually. And there is still so much more to explore and discover in some beautiful parts of Spain.

For more information contact the organisation at:  pdlhistoria@gmail.com or
www.pdlhistoria.wordpress.com

If you have any information about the North East men and women who were in any way involved in the Spanish Civil War please get in touch at garyalikivi@yahoo.com