My ambition is to play a villain in Coronation Street, I want to be walking in Newcastle city centre where a granny with a purple rinse comes up to me and hits us with her handbag cos I’ve killed her favourite character.

Some people say to me why not be a Bond villain ? But I can’t see there being a Geordie Bond villain can you’.…laughs Steve as we sat down for a chat in The Centurion bar in Newcastle Central Station.

Do you think people watching is a great tool for actors ? Yes that’s how you get the best out of your characterisations is by watching other people.  When I wasn’t acting I was working with the general public, we ran a Post Office and I’ve worked as a bouncer on the doors of nightclubs. I’ve seen the best and worst of people from your solicitor who can’t handle his drink to your charver who can’t get in cos he’s got tracksuit bottoms on.

I’ve met and talked to all the major criminals, the Kray Twins in prison, the train robbers, all the hard men up here in Newcastle. So I’ve got a fair knowledge about those people and as an actor I am one of the few who love being typecast.

I’ve got two agents, Sam Claypole in Darlington and in London, Shirley Lewis, both of them laugh when I get cast but I’m happy to play a gangster. Can you really see me where I’m the vicar or the loving dad ? (laughs).

‘Can you really see me playing a vicar or a loving Dad ?’

You are involved in a number of films, The Krays, To Be Someone, The Middle Men, where are they at ? They’re all at different stages, I’m involved in The Sayers project in Newcastle which is great because I wrote the book Tried and Tested at the Highest Level. An autobiography of Stephen Sayers a former criminal in the West End of Newcastle, he and his two brothers Michael and John became quite notorious. The book has done fantastically well and the next step is try and get a film made but we didn’t expect it to come as quickly.

We were focusing on doing another book, maybe a documentary but then we were approached by Garry Fraser from Edinburgh. He picked up a copy of the book from a friend of his who is in Stephens former line of business shall we say. He read the book in two days, loved it, so we met up.

I had done research on Garry’s background and found he had a degree of success with getting work from book to screen, he had also won 2 BAFTA’s, he didn’t mention that when we first sat down and talked. One of his BAFTA’s was for a documentary he had made basically about his hard upbringing in the housing schemes of Edinburgh, getting into drugs, becoming a drug dealer then ultimately sent to prison.

In Everybody’s Child he revisited places that were very painful to him, hence it won an award in Best Documentary category. He caught interest from author Irvine Welsh, he introduced him to Danny Boyle who involved him in Trainspotting 2.

Also the BBC have just commissioned a short series that he has written called The Grey Area, so he’s gradually turned his life around in the last 6 or 7 years making short films and perfecting a particular genre.

With all this background and living the life and most importantly understanding it, we were interested in getting him on board with Stephens film so it was great news that he liked the book and wanted to get involved.

Over the last 12 months we have met and got on well, another good thing that came from meeting up was he asked if I was interested in working behind the camera. Now my main focus is being an actor and I’ve got a little experience of production when I worked on the Freddie Foreman documentary for Salon Pictures, so I said yeah anything to learn from that side of the camera will be beneficial.

How did the film come together ? We held open auditions at The Tyneside Irish Club in Newcastle where 130 people turned up in this big concert room. Garry set up a few scenes, a kitchen over here, a police interview there, there was a bar and we roughly done about 3-4 hours worth of improvisation. A unique way of doing it, improv is not unique but done on a big scale was, and it worked.

He got it down to 25 people of which I was one, we got a call back with some scripts and I was cast as Stephen Sayers. I thought I was going to play the younger brother Michael but Garry saw something and asked me to play the lead role. I’ve known Stephen 20 years so it was an honour to be asked.

Do you feel any pressure to get it right ? I don’t feel pressure from Stephen that comes from myself, always wanting to learn the craft. I’ve just come off the back of the new Quadrophenia film To Be Someone which comes out this year. Ray Burdis was directing and I was playing a villain alongside my friend from Glasgow, Scott Peden.

He was doing things on set which I loved, really playing with his villain character putting things in, taking stuff out, I learnt so much and I told him. Some things I took into the Sayers rehearsals with Garry and he said ‘Great, you made it real’.

Some writers are very precious about their words in the script….I have worked on things where that has been the case and it has to be said because it leads to the next scene or pops up six scenes later so I can see why people work like that.

With this, Garry tends to work with non-actors, his BBC series The Grey Area includes mostly reformed drug addicts, some years ago I watched and really liked a film called  ‘Shooters’ where bouncers played bouncers, drug dealers played drug dealers you know like that, reaching for realism. 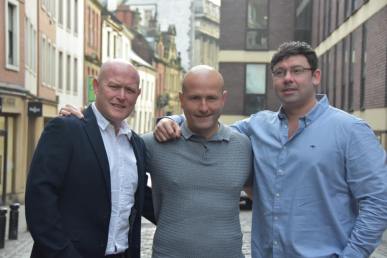 What can we expect in the film ? Stephen is a humorous character so there is room for Northern humour in there but when you read the book it’s very graphic as regards the trauma he suffered as a child, his hard upbringing and schooling in criminal ways.

The film is a journey from Stephens early life where his Dad was a heavy drinker, had a day job and being a criminal. All fascinating stories but there is humour in there it’s not like the films The Rise of the Footsoldier, I acted in the third film of the franchise working with Shaun Ryder (The Happy Mondays).

That’s just about beating people up really but Garry’s film comes at the story from a different angle. The aim is not to glorify criminality it doesn’t make Stephen a hero.

When we received feedback from the book people felt sorry for Stephen, especially women who wanted to mother him. Some people will detest it because he was a criminal, but it doesn’t shy away from telling his story, his start in life and what he decided to do.

I’d love to do the wider story of 120 years of the Sayers family in Newcastle. It’s like Catherine Cookson meets the Goodfellas, if the film was picked up it would be like Peaky Blinders in Newcastle.

You talk about humour being in the book…. Yeah one time the Mam got a tip off that the police were coming round to the house, well the kids were well trained in what they had to do. Run around the house looking for stuff and get rid of anything that would incriminate their Dad.

Well this one day they found a suitcase and their mam told them to hide it outside. They buried it underneath a loose tombstone in Elswick Cemetery just across the way from their home. Michael, Stephen and John hid with the suitcase and looked over to the house where they saw police leave empty handed. They looked in the suitcase and seen it absolutely stacked with cash (laughs).

Another story is about the time Stephen would be hanging outside the pub waiting for his Dad, there was always a woman there called Big Jean.  She would chat blokes up in the pub, when they were half cut get them outside and bash them over the head with her handbag, then rob them and off she’d go. Turns out she had a big brick in it (laughs).

There is little stories like that and depending on budget those scenes would be great to see in the film.

Lately I’ve watched the Italian crime drama Gomorrah and the addition of a great soundtrack help lift the story on screen. Is that something you’re looking to do ? We’d love to be able to use music from the times we’re telling the story in, but budget restraints don’t make that possible.

There has already been North East based musicians asking about the project and putting themselves forward, we’d love to use them if it fits the text. The aim is to showcase North East talent and we’re really excited about the whole thing.

You can see the stories being dramatized and it’s exciting for me cos the stories can be put together on screen with the music and it could do the North East proud.

What next Steve ? We’re filming a trailer for the Sayers film in March and I’m going down to London soon where I’ve been cast in the new Krays film, then working on a second draft of the new Freddie Foreman script which is close to my heart as I am very good friends with him.

To buy the book ‘Tried and Tested at the Highest Level’ go to WWW.THESAYERS.CO.UK

Part two of this interview will be posted soon.