I first started work in 1968 when I was 16, I worked with a guy who was in the Jasper Hart band here in the North East. I used to go around with them and decided I wanted to learn guitar and join a group. Then one night at the Sunderland Monkwearmouth Club the singer asked how I was getting on with learning the bass guitar, he was very encouraging. Then half way through the set and totally out of the blue he asked if I wanted to join him on stage and do a couple of songs. Well that was it, I got the bug. The singer was AC/DC’s Brian Johnson – and that’s my claim to fame (laughs). 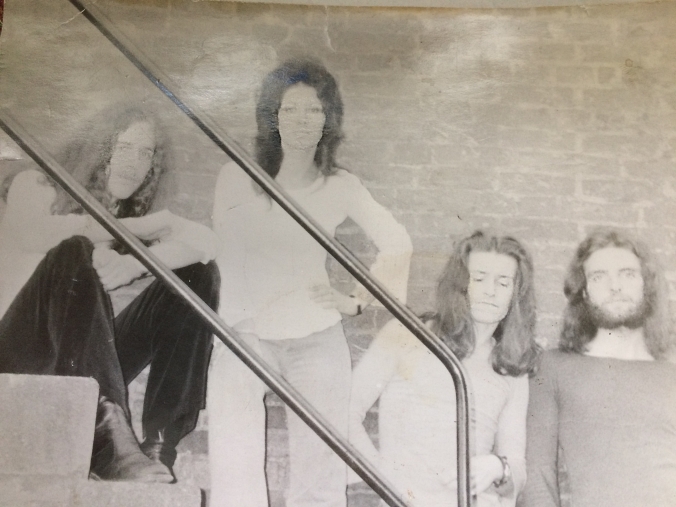 What band were you in and where did you play your first gigs ? Me and some friends – Micky Duncan, Mary Downing and Micky Fenwick –  took on Hire Purchase agreements to buy equipment for a band called Alcatraz. It was seven nights a week supporting the Bingo in working man’s clubs.

One night in Hartlepool the Concert Chairman knocked over an amplifier and didn’t apologise. The bass player Mick Fenwick said Don’t worry I’ve dealt with it. The Concert Chairman used a Bingo machine, it was a big plastic see through box and inside were ping pong balls with the numbers on, when he switched it on the balls were blown to the top by air and he would pick one out. Well I looked over and could see them floating about in the box – Mick had filled the Bingo machine with beer! The Concert Chairman turned on the machine in front of the audience – I’ve never heard a club laugh so much. In the end we were paid off and banned from Hartlepool (laughs).

That band were out working a lot and in the end Mary left so that was the finish of Alcatraz.

Did you record any of your songs ? After the stint in the working man’s clubs I got together with a musician called Colin Lumsden – we went under the name Queer Band who were active from 1974-76. We played original music, just trying to do something really different from the club scene. The line-up was me on guitar, with bass/vocals and sax from Colin and Geoff Pybus on drums.

We recorded at Morton Sound Studios in Newcastle, it was a two track studio, and we made acetates from the recording. Then played a showcase gig for EMI at the Chelsea Cat in South Shields, but unfortunately didn’t get signed. Then Colin went on to better things when he fronted Radiation in Sheffield then went to South Africa.

I stayed in the North East, this was the late ‘70s, and recorded a track at Impulse Studios in Wallsend. The song was called Hang Jack about the Yorkshire Ripper who at the time was terrorising the country. The track was played in clubs throughout the country and one day the Police turned up at my house. I was interviewed and had to give a hand writing sample. My parents were also interviewed asking if I was ever away from home. Yes he plays in a band and if he was responsible we would be the first to tell you. 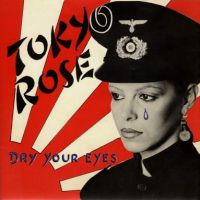 In the early ‘80s I formed Tokyo Rose – Me, Val Ophfield, Graham Bradley, Geoff Pybus. A gig was arranged at Annabels club in Sunderland and some rep’s from CBS came all the way up from London to see us play. But nerves got the better of us and they left without saying goodbye.

Before that Tokyo Rose had recorded a single called Dry Your Eyes at Guardian Studios in Durham. Noddy Holder from Slade reviewed it for the Record Mirror. He said we were a great band but we should go to a bigger studio. This upset the producer Terry Gavaghan and we felt it was unfair as Terry was heavily involved with the track and did a brilliant job playing and producing.

Years later I heard from Vinyl Dealers that the single was selling for £100 in Japan. This prompted me to dig out the music and video and put them on social media. In the meantime I learned how to build websites so I created www.tokyorose.biz

I realised my gigging days could no longer be funded so I built a studio with Pete Barclay who used to play for North East band Lucas Tyson. We wrote and recorded songs under the name Tokyo Rose. We released them on the internet and also released a CD which featured all original songs. Our musician friends, Dave Ditchburn, Rob Foster and Dave Donaldson came in as guest vocalists.

What are you doing now ? I still write and record songs under my name Derek Buckham AKA Tokyo Rose and thoroughly enjoy it. It’s not about the past it’s about what’s happening in your life right now. I still enjoying writing hence my suite of Lockdown Songs – Angels in Blue, The Lady that Saved My Life and The Year That Never Was.

The Queen, Margaret Thatcher and Paul McCartney walk into a bar in Easington mining town – sounds like an opening line of a joke but it’s a link to a song from deep down in the coal pits of the North East.

You might have heard of Easington, the town was used as the backdrop in the film Billy Elliott.

I asked the songwriter and ex-miner of 11 years, Pete Hammond, how did the single Living in a Mining Town come about ? Easington in County Durham used to hold a carnival every year to commemorate the mining community and I was asked to write a song in 1989. A lot of people got on board when they heard the rough version of the song and the Easington council committee wanted it to be made into a single for the town.

The song was originally recorded in The Studio in Hartlepool then mixed at Abbey Road studios in London. I went down and met Paul and Linda McCartney and was given a tour around the studio by Paul. He also showed me an easy way to play his song Blackbird.

Metro Radio, Radio Tees, Radio One and many others played the song and I done a few interviews for them. 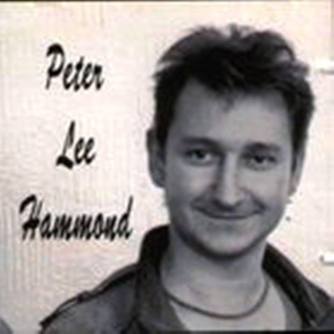 The proceeds were to raise money for a local handicapped school, so they could get a hydro pool for the residents. The money from the song also went towards launching a music collective in the area for musicians. Many businesses donated money and it was supported by celebrities like Prince Charles, Her Royal Highness the Queen, Neil Kinnock MP and the Prime Minister Maggie Thatcher.

The Queen asked for a copy of the single to be sent to her and Maggie Thatcher sent me a signed photo of herself to auction and raise money. But no-one wanted to bid given the feelings the miners had for her, so I still have the photo at home.

Were you in a band then ? Yes at the time I was in a band called Just Us. I have won many song writing contests and awards over the years and cut album and cd’s. One prize for winning a contest was song writing lessons from the lead singer of the Strawbs, Dave Cousins, and guitarist Brian Willoughby. 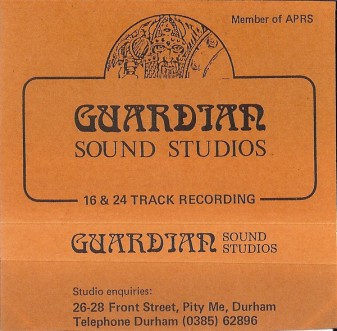 What studio’s did you record in ? I recorded at Guardian Studios in Durham run by Terry Gavaghan. The studio was just in a normal street, it was two houses knocked together with no big sign saying recording studio, I thought I was at the wrong place at first until Terry answered the door.

What were your memories of the studio ? Terry was a great, down to earth kind of guy always made you feel at ease, which was good as it was my first time in a studio or recording a song for that matter. I remember the mixing room being very cramped full of equipment and a large mixing desk. But the session went smooth and the songs sounded great, Terry really knew what he was doing. We recorded three tracks there, Name on a Stone, Thomas Watson and I’m a Loner.

Terry was full of jokes and stories, one was that the studio was haunted by the ghost of a child that had been run over on the road outside the house. He also showed me a fur coat belonging to John Lennon, Terry said when he first started out he worked at Abbey Road studios, he let me take a piece of the lining and a clip of the fur as a keepsake. I have them in a frame at home.

Looking back what does the song mean to you ? The song gave the community a sense of pride when the single came out, I was very proud and honoured to have been asked to do this for the place where I was born and raised.

What are you doing now ? I still write songs and have over 1,000 up to now and record them on my own home studio. They can be heard on YouTube and my song writing Facebook page, you can find it by putting Hammy in the search bar.