A dozen teenage metallers from South Shields dressed in bike jackets, denim and long hair jumped on a coach to travel 200 mile south of Tyneside. In honour of our Viking ancestors we burned down the highway, raised mighty hell and invaded… Stoke on Trent.

The Heavy Metal Holocaust was on 1 August 1981 at Port Vale football ground, but from the off the neighbours tried to get the festival banned. The Stoke council gave the go ahead after the promoter offered a free coach trip to Blackpool for elderly residents.

In the first issue of Kerrang, the all-day metal extravaganza was originally planned for Milton Keynes Bowl, in what would have been the first of two shows at the Bowl that year.

Rock at the Bowl on 8 August ’81 featured headliners Thin Lizzy, the Ian Hunter band and the mainstream sound of Judie Tzuke and Q Tips. Reviews say the gig was poorly attended.

A full page in Sounds had Black Sabbath and Motorhead advertised as double headliners at Port Vale on Saturday August 1st – with a monster PA in tow.

A ‘major band’ was to be announced with rumours circulating that Ted Nugent was being added to the bill – now Ted isn’t exactly the Ken Barlow of Metal so backstage refreshments with Lemmy and Ozzy might get messy. The Nugent rumour appeared in the first issue of Kerrang, but it was just that, a rumour, and the eventual axeman who played on the day was Frank Marino & Mahogany Rush.

A week later Sounds ran a story that Sabbath had pulled, and a full page advert read Ozzy Osbourne’s Blizzard of Oz had stepped in. No surprise a deal had been struck as that summer Motorhead were opening for Ozzy on a North American tour.

But with only one album behind the former Sabbath frontman, the band might have to rely on old Sabbath favourites to stop a (crazy) train wreck coming down the track ?

Why did Sabbath pull out ? Tony Iommi doesn’t talk about it directly in his biography, but he mentions that summer the band were in Los Angeles recording new album Mob Rules, the follow up to the very successful Heaven & Hell.

The day was propped up by NWOBHM band Vardis, on stage they were hot, frustrated and looking for a groove. But as the gears began to click, suddenly it was all over, while out in the field the disciples gathered around the stage, sensing something special was in the air.

Then up came two Canadians and one American band fighting it out between each other. The slick American rockers Riot glide through their set with guile and finesse. Next up Triumph searched for magic only to get caught in the crossfire and manage to hang on bravely during the bottle wars. A solid performance from Frank Marino earned a glowing respect from the sweltering hordes gathering at the altar.

As the sun set the High Priest of Rock n Roll, Lemmy, invites Ozzy and Randy Rhoads to plug in for the ride and amp it up high and loud. They leave no room for doubts delivering a blistering set, a crazy train rumbling down the line, hot enough to light a bonfire.

Then an eerie silence falls and dark clouds gather overhead while lights spark in the night sky. Through the smoke headliners Motorhead arrive and steal the show opening with Ace of Spades – but the night belonged to Overkill. 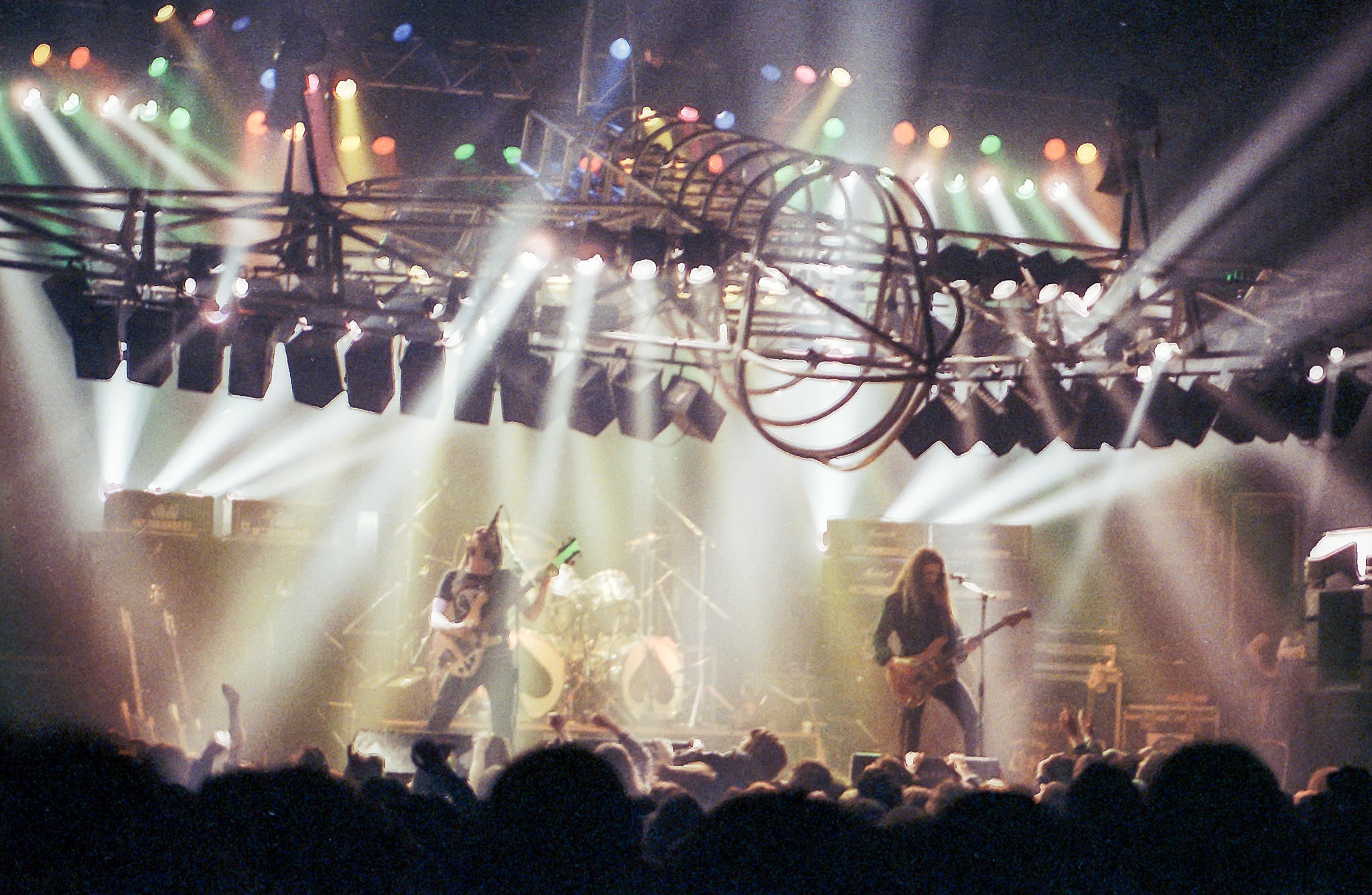 I could write about the times I’ve seen them absolutely pound the Newcastle City Hall into submission, or their blistering attack at the Heavy Metal Holocaust at Port Vale in ’81.

But no, this is about a more recent time when I caught sight of some remarkable photographs of the band live on stage.

It was a Saturday, I had been working all day and was tired and looking forward to watching some football on the telly. I thought to check on my emails before shutting down the laptop.

There was only one unread and written in bold, it was from a guy called Dave Curry and labelled ‘Motorhead pics’.

A few months beforehand I asked live music fans for any photos they had taken at gigs in the ‘80s and I would post them on the blog with a bit of blurb – who took them, where and when, just a short description because the main focus was the photos – and some belters came in which captured the atmosphere and excitement of watching a band.

I clicked on the message and a small thumbnail photo appeared. Well, I’ve taken, sent, received and edited tens of thousands of photos over the years so quickly recognise when the image is good or not. And this was.

After downloading the rest of the photos and clicking on each one they appeared full size on the screen –  while pointing at the lap top shouting ‘That’s the mighty Motorhead in all their f***ing glory destroying the City Hall’. And that’s the title right there.