1977 saw three big events happen in the small seaside town of South Shields in the North East of England. The boxer Muhammad Ali had his wedding blessed, the Queen visited on her Royal Silver Jubilee and three lads from a working-class housing estate formed a punk band – the Angelic Upstarts.

Why not put them together in a film ?

Some projects take a lot of digging around to get made but on this one each person contacted about contributing to the film lead to another and another – making the whole process easier.

This blog features stories and soundbites from contributors to the documentary made in 2013.

Narration: 1977 was an extraordinary year of royalty and revolution. It was the storm that followed the calm. We’d had the long hot summer of ’76 and the high-water mark of disco and glam rock.

Trevor Cajiao: The glam thing happened when I was 12/13 year old and I loved all that stuff Slade, Sweet and Mud.

Neil Newton: I remember Wizzard coming on and the bloke with the big hair his face all painted and being mesmerized by that.

Narration: Many 1970’s teenagers were enjoying their first live gigs from such established and diverse acts as Chuck Berry and Black Sabbath.

Richard Barber: My first gig was February 1977 I went to see Black Sabbath at Newcastle City Hall on the Technical Ecstasy tour. We were second row from the back and as soon as Ozzy came on he went ‘Everyone go fuckin’ wild’ and everyone piled down the front. One kid had a big wooden cross and that just got chucked somewhere.

Trevor Cajiao: When I heard rock n roll that’s what I realised that I wanted to get into. I saw Chuck Berry at the City Hall in 1976, it was fantastic, blew me away.

Narration: 1977 was a sad time for fans of Marc Bolan and Elvis Presley. Both stars died young.

Colin Smoult: The death of Elvis was a big impact on everybody, even if you were into Elvis or not because he was such an iconic figure.

Neil Newton: My mam was a big fan of Elvis I remember the day he died it didn’t really have much of an impact on us cos I wasn’t particularly a fan – but he had some canny tunes.

Narration: In the North East we saw a visit from the American president Jimmy Carter and in the same year the Queen came to South Shields on Friday 15th July as part of her Silver Jubilee. The very next day a King came to town.

Derek Cajiao: I’d been given a camera for my birthday I hadn’t had much experience using the camera, but I went down to take some photographs and I managed to catch Ali as he passed the fairground and the Sea Hotel. I got some great shots of him on the bus, and it was fairly apparent he was playing the crowd, pointing at people, threatening to jump out of the bus and chin somebody, really working the crowd.

Pat Robinson: (Her husband Sepp Robinson was Mayor). We were on the top of the bus and at one point it rained so at one of the pubs we passed I said to my husband go and get a bottle of whisky, we passed it round cos we were so cold and wet, at least it warmed us through for a few minutes. Muhammad Ali’s wedding was blessed, and we all went to the mosque and these incredibly beautiful people arrived, they were both stunning and dressed in white.

Afterwards we went to Gosforth Park for a fantastic lunch and right through the two days when the cameras were on Ali turned on the big lip but when he wasn’t doing that, he was a sensitive, pleasant, attentive man. He was absolutely charming.

Narration: But away from the glamour and celebrity a sense of frustration was taking hold. The soundtrack was one of anger, the future seemed bleak and the music was reflecting that.

Colin Smoult: I think the music change in 1977 was down to the blandness being presented in the charts, novelty singles, very middle of the road stuff. Bands appearing on Top of the Pops that were no better than a cabaret act. There was no wonder that the punk revolution came along.

Neil Newton: When punk came along I was much more aware of it because it was so direct.

Trevor Cajiao: A lot of people were saying the whole punk thing was like the rock n roll of the ‘50s as it was a rebellious type of thing but as a kid I didn’t understand that because I was just using my ears and The Clash don’t sound like the Johnny Burnett Trio, but in hindsight what they were getting at was the actual energy, the guitar music, rebelling against stuff.

Narration: In South Shields three friends from the Brockley Whins Estate started a punk band The Angelic Upstarts and little did they know where it would lead them.

Mensi: The nucleus of the band really was me, Decca and Mond.

Mond: We had known each other since we were kids, we used to hang around the shops at Brockley Whins.

Decca: They said here Decca we’re forming a band and you’re gonna be the drummer.

Mond: We found you can hire the Bolingbroke Hall and we used to get about 300 people in.

Decca: I think that’s when we started to take it serious, we all got our heads together. I mean Mensi was a prolific song writer.

Mensi: I just write about what’s happening around us.

Decca: He came out with Murder of Liddle Towers, the song that made us famous. Next you know you’re on Top of the Pops and the rest is history.

Narration: The end of the 1970’s saw people looking forward to a new decade. Would we ever see a year like 1977 again.

The film was narrated by Alistair Robinson, music from The Panic Report and the Dipsomaniacs, with excellent photographs by South Shields photographer Freddie Mudditt (Fietscher Fotos) and Derek Cajiao. 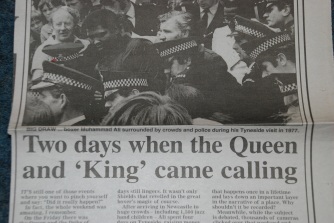 The King, The Queen & The Punk (25 mins 2013)  watch the edited version on Alikivi You Tube channel.