‘How Frankie Goes to Hollywood were discovered by default, why Tina Turner was nearly not on, what was a life changing career appearance for her. Also, what was Ozzy doing in a coffin on City Road ?

Hear all the backstage stories from ‘80s music show The Tube at a free talk by Chris Phipps. 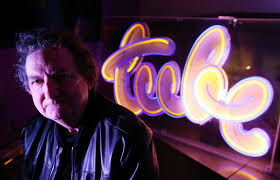 The Tube was broadcast from Tyne Tees Television Studio 5 in Newcastle and hosted by Jools Holland and Paula Yates. It showcased everyone from Madonna, French and Saunders to Frankie Goes to Hollywood. I was in the audience for the early shows and watched some great bands including Thin Lizzy, Big Country, The Alarm and American rock singer Pat Benatar.

Chris will be talking about the sights and sounds from behind the scenes when he worked on the show. ‘As an ex-BBC producer I initially only signed up for 3 months on this unknown programme and it became 5 years! I was mainly hired because of my track record for producing rock and reggae shows in the Midlands. On the night I’ll be telling of my Jamaican exploits’.

Chris will also have copies of his new book ‘Namedropper’ for sale at a special price.

‘Creative process for me is always different, some are instant, some are like pulling teeth and it goes on for years, literally. You never can tell’.

Bernie Torme is best known for playing guitar in Gillan, with the former Deep Purple vocalist Ian Gillan. Ahead of his Dublin Cowboy UK tour, Bernie Torme broke off rehearsals to talk about his forthcoming eight date tour…..
‘Its pretty much like the first Gillan tour dates I did to be honest, before we became famous and it all went bang and different, those were probably the best times for the band in truth! Marquee and Birmingham Barbarellas and all that. Ian was a legend but it was a low point in his career and when the Gillan band took off it became a bit difficult for all of us to handle. He knew how to, we didn’t!

Obviously now I’m a lot older and much stupider and not trying to go mad all the time like the old days, just trying to stay alive through the mayhem, so that’s different!
Also with Gillan we never did a run of more than 4 dates, Ian’s voice used to fuck up. I don’t need to worry about that because mine fucked up long ago!’

When you were young was there a defining moment when you said to yourself “That’s what I’m gonna do” was it seeing a band play live, hearing or watching maybe The Beatles?  ‘Thats a good question! Not sure there was ever a single defining moment though. I think generally it was the Rolling Stones followed by The Yardbirds with Jeff Beck if anything.

I loved The Beatles, the songs definitely, but the guitar playing and sounds didn’t really hit me all that much, more John Lennon’s voice, though. I loved the riffy stuff like Day Tripper and Ticket To Ride. Keith Richards did really hit me though, the sound of the guitar on The Last Time, Satisfaction or 19th Nervous Breakdown really blew me away. And the whole of the Out Of Our Heads album.

And then hearing Beck on the Yardbirds Heart Full Of Soul, just loved it. Shapes Of Things, Mister You’re A Better Man Than I, it was just wow! How can a guitar do that! It was the sound that I loved, that is still the thing for me, the sounds you can get out of a guitar. I love making those sounds’.

Can you remember your first guitar and what influenced you to pick it up ?
‘Yeah of course! First guitar I ever had my hands on was some shitty Spanish with no name, borrowed from a friend of my sister! I liked it so much I saved up and got myself an Egmond acoustic for £6 10 shillings, lotta money in those days! Then my Dad, who had a second hand shop/auctioneers with his brother had a second hand Hofner Colorama electric turn up, for a tenner, so he gave me that. Lovely guitar, wish I still had it’.

How do you feel about the work you are producing now and does the creative process take time or do songs come quickly ? ‘Well I do the best I can, I just do what feels right for me. That’s something that has changed since the old days, back then you were always trying to please a bunch of suits, some of them were good people and had a sense of respecting what you did, but most were just trying to get you to produce an instant hit, and that was all about money and not about music in any shape or form. So now I just follow my nose and do what I love, its working well for me.

Creative process for me is always different, some are instant, some are like pulling teeth and it goes on for years, literally. You never can tell. Just have to have a good memory really !
Lately I’ve been able to do a double album, a single album and now a triple album, mind you I’m not planning to buy a yacht or anything on the proceeds! Just as well really, maybe a toy yacht haha’.

Was the pledge for your latest album ‘Dublin Cowboy’ successful ? ‘Bloody crazy successful! Best one so far, can’t believe it! Its also been a really fun experience this time, first one (Flowers & Dirt 2014) was great but I didn’t really know what I was doing or how it worked, so it was a bit stressy.

Second one (Blackheart 2015) was weird because some nutcase broke into my house and beat me up and nearly killed me in the middle of it, so I was maybe not in the best headspace during that one, but this one has been a 100% blast, lots of fun’.

On your upcoming tour are you playing any gigs where you’ve never played before ? ‘Yes, a few this time, South Shields Unionist club, Glasgow Nice ’n Sleazy and Manchester Factory, its always good to play new places, looking forward to them!’
Thanks for taking the time to answer Bernie and wish you very good luck for the Shields gig on April 1st. You can find all dates on the Dublin Cowboy UK tour on the official website bernietorme.co.uk