The band are currently in the studio writing and recording new material for a 5 track EP to be released this year. But rewind back to nearly 40 years to Mansfield, UK where Chris Bradley and Andy Dawson formed Savage.

Little did they know the influence they would have on one of the biggest bands in the world. Chris takes up the story…

‘Our first show outside the UK was playing to a 10,000 strong audience at the Aardschok Metal Festival in Holland. The headliners were Venom with Metallica as special guests.

Metallica came to our dressing room for some pre-show drinks and told us that in the early days they were fans of the band and used to play our songs.

In fact they recorded our tracks Let it Loose and Dirty Money and put them on the demo tape that got them signed to Megaforce records run by Jon Zazula. And you know what, they never told Jon that it was our song’.

What venues did Savage play?

‘The first ever Savage show was in 1979 at High Oakham Youth Club in Mansfield, then most of the shows were at local pubs.

Then from around 1983 as our star began to rise so to speak we started to expand across the whole country to various rock clubs and eventually spread out to festivals in Europe. Kerrang gave us favourable reviews of our shows so that helped a lot in getting more gigs’.

‘Pretty soon after forming Savage we started writing our own material so we recorded a few demo’s. I think our first one was in 1979 that was recorded in a local 4 track studio in the cellar of a terraced house.

Our first experience of a more professional set up was a full day in a 16 track studio in Wragby, Lincolnshire when we recorded two songs for the classic Heavy Metal compilation Scene of the Crime. As I remember the band’s paid about £200 each to cover the costs.

There was Panza Division, Manitou, Sparta, Tyrant and us. We recorded two songs Dirty Money and Let it Loose. In the end they released the album and we got 25 copies to sell.

A copy of the album ended up in the possession of a young Lars Ulrich which started the Metallica connection that I was talking about earlier’.

‘In 1982 we were on another compilation album Metal Fatigue produced by newly formed label, Ebony Records in Hull. Other bands on the album included Assassin, Hot Wire and Headhunter. In all I think there were nine bands on the album.

For that recording it was a similar deal to Scene of the Crime, we paid about £200 each to get a day in the studio and record one song. We recorded Ain’t No Fit Place and the producer was Darryl Johnston who was also the founder of Ebony. Basically that was the start of our relationship with the label’.

‘After the critical success of the track, we went back into Ebony and recorded a double A side, Ain’t No Fit Place and China Run. For that 7” single we payed to the tune of £1,000 and Ebony released it on their label.

Again the sales went really well, so well that they proposed a deal were they would pay for recording a complete album and releasing it on their label. We went for that and Loose ‘n’ Lethal was born’.

What are Savage planning for the rest of 2017 ?

‘We are currently in the studio writing and recording new material for a 5 track EP to be released this year. Writing in the studio is a new approach for us so it will be very interesting to see what we come up with!

Last year we produced and released 7, our seventh studio album. That included a second disc called Live ’n’ Lethal recorded in our home town featuring tracks from our entire first album plus selected numbers from our other albums. We are still an active live band though most shows now tend to be in Europe’. 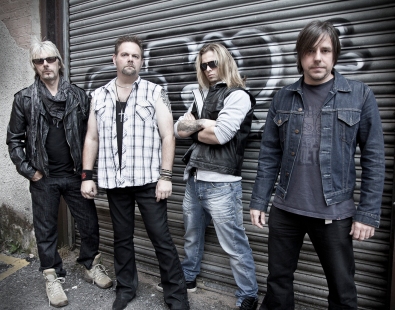 Both albums and more merchandise is available from the official website http://www.savageband.com