On the eve of releasing a new album Tytan main man Kev Riddles comes out fighting….

‘We’ve now had a settled line up for two years and recently wrote and recorded the new album Justice Served. The album was produced by the legendary producer Chris Tsangarides and recorded at his Ecology Rooms Studio in Kent’.

(Chris was responsible for producing records by Anvil, Gary Moore, Thin Lizzy, Judas Priest and Tygers of Pan Tang who feature in an earlier post). 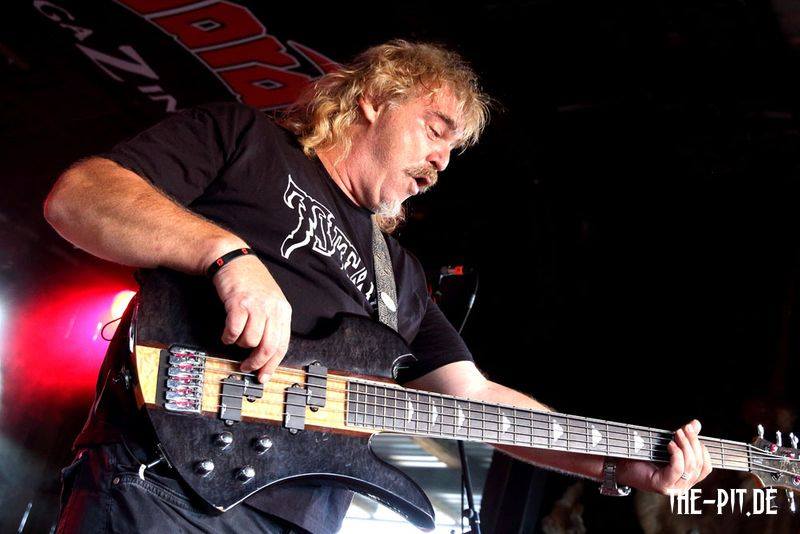 Chris otherwise known as ‘The Dark Lord’ is an amazing character both in and out of the studio. He works very quickly, coaxing good performances with very few takes.

The whole album was recorded and mixed in 13 consecutive days with as much time spent listening to Chris’ stories and anecdotes as spent actually working !’ 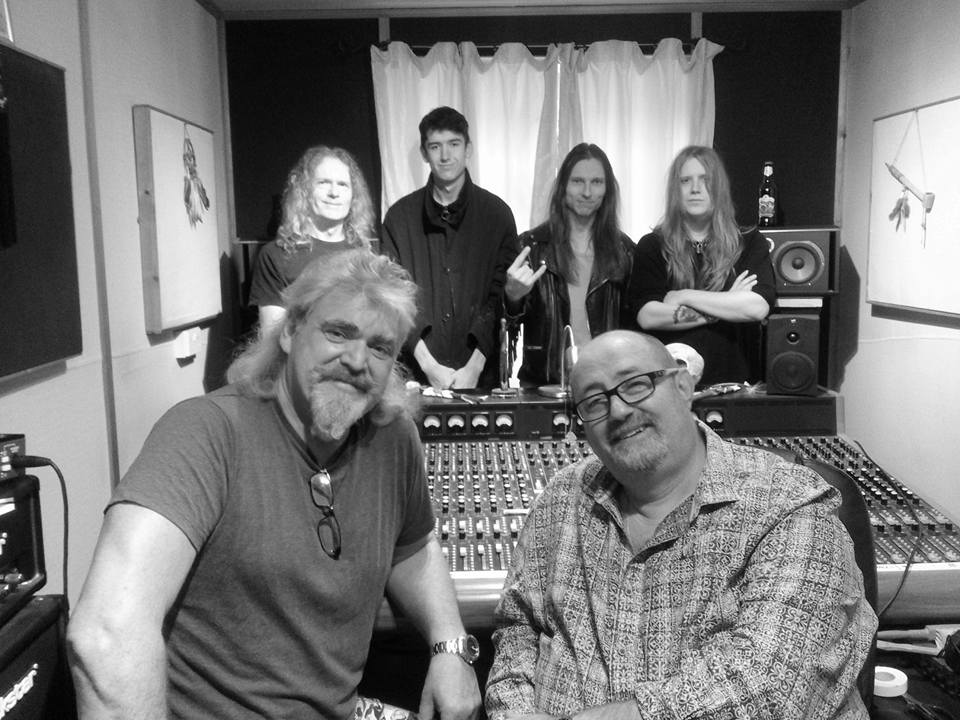 ‘Justice Served was very different from making Tytan’s first album Rough Justice, which was recorded in 1982 at a studio in London owned by The Who.

In those days studio time was hideously expensive and for the same money I could have bought a terrace of houses in Stockton on Tees’. 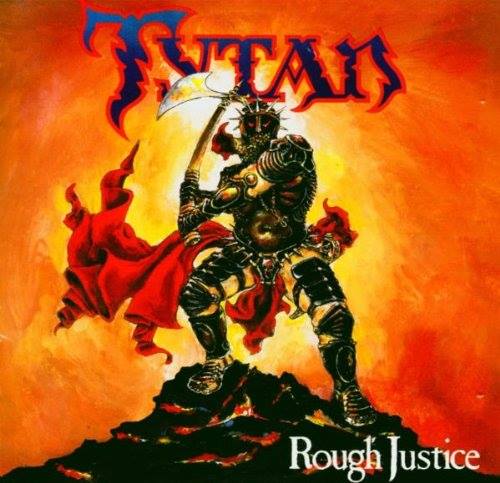 Where did it all start for you Kev, was there a defining moment when you said “I want to do that” ?

‘That’s easy, it can be summed up in one album…Age of Atlantic ! a 70’s compilation album featuring the likes of MC5, Iron Butterfly but mostly listened to the two tracks by Led Zeppelin!

You can imagine the effect of hearing all of those bands on one album, at the tender age of 12 years old on a poor boy from Hackney ! It inspired me to nick the album from a record store, take it home and play it to death’.

‘My first ever gig was playing french horn in a brass chamber ensemble at a girls boarding school in Yorkshire – yes really ! I’ve never been so nervous but the lure of rock n’roll had me in its grip from that day, the girls and music, yep what a combination!’ 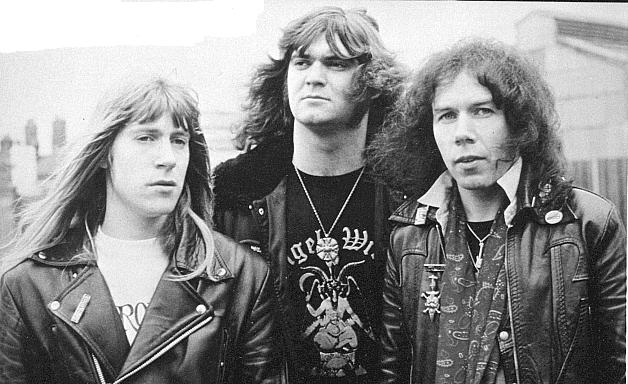 ‘In the halcyon days of Angel Witch (pic above) we toured constantly, either in our own right or with the likes of Black Sabbath, Motorhead, Saxon, April Wine and Girlschool.

We played all over the UK and Europe. My favourite gigs to this day are still Newcastle City Hall, Manchester Apollo, Hammersmith Odeon and the Marquee’.

In September ’82 I went to Newcastle Mayfair to see Tygers of Pan Tang and Tytan opened the show (my ticket above). What can you remember from then Kev ?

‘In ’82 with Tytan we went all around the UK on The Cage Tour with Tygers of Pan Tang. During the tour we had an exotic dancer that used to come on stage and perform a rather raunchy routine with our singer Kal during the song Money for Love.

The fans loved Carmine Brudenell but the Tygers hated how well she went down, so tried to stop her getting on stage. They put up barriers at the side but she always managed to appear, she even once climbed through ‘The Cage’ and did her routine from the drum riser ! Strangely we weren’t asked to do the European tour!!

Then in my days with Paul Samson’s Empire, I’ve good memories supporting Iron Maiden on the Somewhere in Time Tour in ’86”.

In the book the Story of Anvil written by Lips and Robb Reiner, they talk about Anvil paying £30,000 to be first on the bill headlined by Status Quo at the Monsters of Rock Festival in 1982. Did you experience this type of deal ?

‘What you’re talking about are called buy-on’s. At the time deals were always done behind the scenes, usually between managers and without the band’s knowledge, although everybody sort of knew it went on.

When I was in Angel Witch we certainly never did any deals as we were popular enough in our own right. Our record company for Tytan may have invested in this way but I don’t know for certain.

And to my knowledge Iron Maiden have never asked for buy-ons from any support band’.

Have you any funny stories from playing gigs ?

‘Way too many comical interludes to mention but a couple would include when playing on stage at Manchester Apollo I knocked myself unconscious while head butting my bass. I had to get numerous stitches for that one.

Then at Brofest 2016 tripping and falling on my arse. I finished the song flat on my back !’ 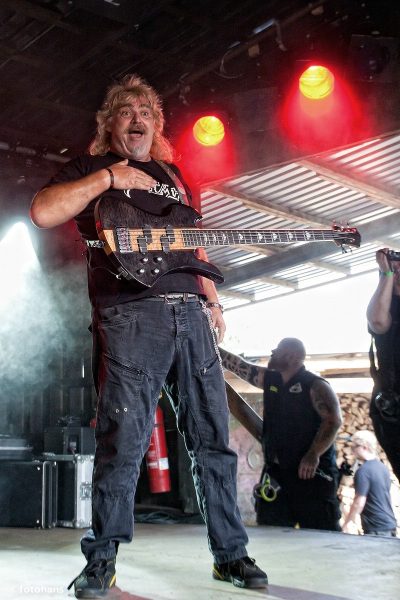 Any future plans for Tytan ?

‘Since being asked to reform in 2012 for the German festival Keep It True, we haven’t stopped working.

In the very near future we have a series of gigs in place with more to be added. They are to celebrate the release of the new album which co-incidentally is released on the same date as my beautiful wife’s birthday’. 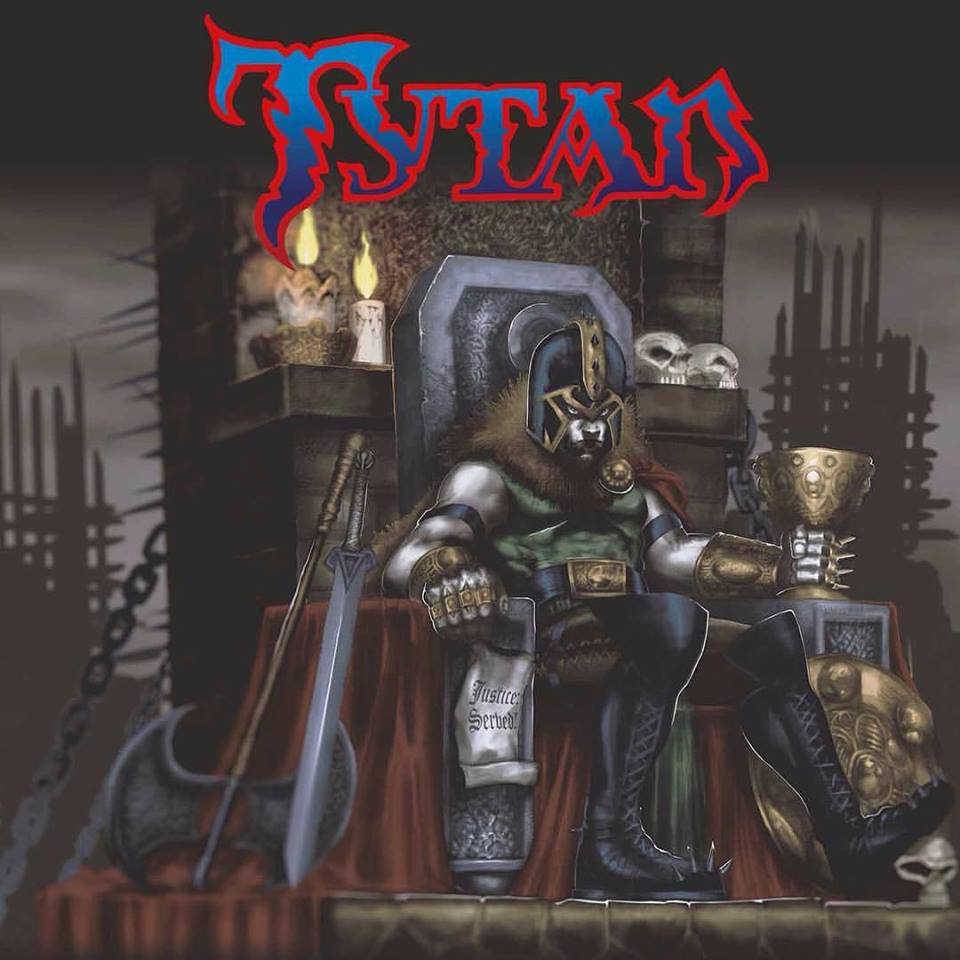