In 1977 three big events happened in the small seaside town of South Shields in the North East of England. The boxer Muhammed Ali had his wedding blessed in the town’s mosque, on her Silver Jubilee the Queen visited the town and while ‘God Save the Queen’ by The Sex Pistols was blasting out of the radio, three friends from a working class housing estate started a punk band. It took them on a journey they could only dream of…

Mensi: The nucleus of the band really was me, Dekka and Mond
Mond: We had known each other since we were kids, we used to hang around the shops at Brockley Whins.
Decca: They said here Decca we’re forming a band and you’re going to be the drummer. I wasn’t doing too much then, so I thought it would be a bit practice.
Mond: Initially we used to rehearse in Percy Hudson youth club in Biddick Hall and I remember our first gig was there, we done a show for the kids.
Decca: Yeh and we only knew six songs, so we played them same six songs three times haha.

Mond: We found you can hire the Bolingbroke Hall in South Shields for about £10 or something like that, and we had a big enough following by then, we used to get about 300 people in.
Decca: We used to play there regular, the admissions were a bag of coal or 50p, well there was coal wagons turned up haha
Mensi: We gave the coal to the pensioners.

At one gig a special guest was brought on stage and in the crowd Graham Slesser and Steven Wilson remember it well…
Graham: The first time I went to see the Angelic Upstarts was at the Bolingbroke Hall when I was 14. There was a pigs head and everybody would run to it, fling it and kick it about.
Steven: First ever concert. First ever punk gig. Unbelievable, walked in, paid me money, it was wall to wall, heaving. I just have this vivid memory of a pigs head being held aloft, and I was transfixed.
Mensi: I think he made his first appearance at the Bolingbroke Hall with a police helmet on haha.
Mond: But at those gigs people started to sit up and take an interest.
Decca: I think that’s when we all started to take it serious you know, when we all got our heads together and started writing. I mean Mensi was a prolific song writer.
Mensi: My lyrics are mainly the easiest lyrics to write cause I just write about what’s happening around us.
Decca: He came out with the Murder of Liddle Towers, the song that made us famous.

Mensi: When I wrote Liddle Towers it was more a sense of injustice that basically someone could be kicked to death. I don’t think I’m ashamed of anything I’ve wrote. Although in hindsight, being a lyricist and a songwriter you can write a song about something that’s in your mind for just that moment. Another thing is being in a band sometimes you think you have great power to change the world, write a song that’ll change the world, full of ideals when you are young.

How did the Upstarts get their name about on a national stage ?
Mond: The journalist Phil Sutcliffe came to see us and gave us our first big write up in the Sounds, it was a centre page spread.
Mensi: We got big helps in our early days. Number one would have been John Peel, he actually played Liddle Towers when nobody else would because I believe it got banned. Then Phil Sutcliffe who actually championed the band. Then Garry Bushell.
Mond: Garry was working for the Sounds at the time and he saw the write up that Phil Sutcliffe did. He was into punk so he came up to see us. There was something in the Sounds every week about us, if it wasn’t a single review it was an album review or a gig review. If there wasn’t any new records out we used to just phone him up and give him stories, we used to just make them up.

At one time the Sounds used to be called the Upstarts weekly because there was something about the Upstarts in every week without fail. And that was all down to Garry Bushell. Bless him. One time we played in Acklington Prison and we actually sneaked Garry in, we pretended he was one of the roadies. 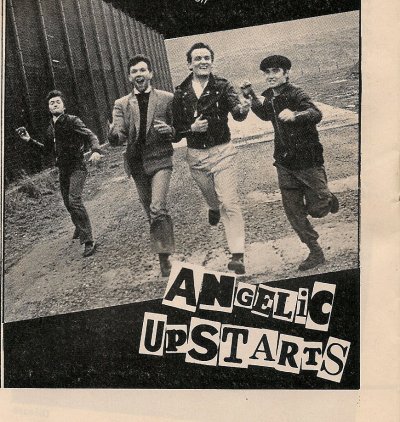 Mensi: A lot of people thought it was a made up publicity stunt but it really happened. Yes we went in there. The prison Chaplain booked us as he thought we were a Gospel band.
Mond: We sneaked Bushell in with a camera, I mean if he got caught he would of ended up stopping in there haha.
Mensi: It wasn’t just a couple of songs we done a full set, we played Police Oppression and Liddle Towers that went down a storm didn’t it haha.
Mond: That got us some great press if nothing else. There was hell on, it was in all the Sunday papers. How could such an anti Police band be allowed to play inside a prison. I seem to remember an MP from Tynemouth called Neville Trotter, he stood up in the Houses of Parliament and asked questions like how was this allowed to happen. Neville Trotter and a pig’s head, you couldn’t write it could you.
Decca: The rest is history after that… next you know your on Top of the Pops.

Pop music has an air of glamour and in the 70’s shows like Top of the Pops paraded the latest stars in front of a huge TV audience of teenagers looking to spend their pocket money on the latest single. At it’s height the BBC show was pulling in audience figures of 15 million. In the Summer of ’79 the Angelic Upstarts were booked for the show. The glamour bubble was about to be burst…

Mensi: We should of got on Top of the Pops with I’m an Upstart because it got to number 31 and stayed in the chart a few weeks but they wouldn’t have us on at first. But we were on once. It was like, nothing. There was no atmosphere.
Mond: I remember we did Teenage Warning it went in around number 29 on the chart. It was a horrible cold studio with four stages in it. There was only 20-30 people there. It was like playing a big warehouse, it was horrible really, not a nice experience.
Mensi: The only good thing was I sang live, they wanted us to mime but I wouldn’t so that was something.

What did punk do for the band ?
Mond: Punk was a great platform it enabled us to get a deal with EMI, another one with Polydor and one with WEA. So yeh it enabled you to get a foot on the ladder.
Mensi: It was a way out for what I consider to be working class kids. You didn’t have to be a student in art school, you didn’t have to be prolific at music you could just bang a dustbin lid and you were away mate.
Decca: The first time I went to America, the kids in New York were into skinheads and that but in L.A. where I lived for a little while it was more like a fashion with them. But here in the UK it was a real movement.
Mond: I never thought I would be with EMI and do an album in Abbey Road studios where The Beatles used to use. We were in studio 2 the one that they recorded in.
Decca: Imagine how I felt you end up drinking with Hollywood movie stars like Marty Feldman who I loved and adored.
Mond: When I was in the shipyards putting lights up on type 42 Destroyers and you told me I was going to do an album in Abbey Road I would of just laughed. I’m an alright guitarist not a great guitarist but I couldn’t see it happening.
Decca: Yeh looking back I’ve been a lucky man.
Mond: But that’s what punk did it made peoples dreams come true.

Interviews from the documentary ’The Butchers of Bolinbroke’ (2013) available on You Tube.
Interview by Gary Alikivi  2013.