The only time I had a press pass was when David Bowie was on and only 6 were given out. When Paul McCartney came to the hall, I was a big fan, I phoned up his press agent and he was great, ‘See you at the stage door 7.30pm’ he said.

But anxiously I turned up 2 hours early and his press agent was really nice and let me in. I spent the next hour and a half in the dressing room with Paul and Linda McCartney, Henry McCulloch and Denny Laine. I used up all my film in the dressing room. Looking back I made very little money photographing bands at Newcastle City Hall, but I did get in for free (laughs).

How did you get interested in music ? I saw Bob Dylan in 1965 in the City Hall when they filmed Don’t Look Now and a year later at Newcastle Odeon on his electric tour.

A friend of mine’s father was manager of the Odeon. One day he said we have this actor coming over from USA promoting his second film and I don’t know what to do with him, can you take him to a pub. So we did and we took Clint Eastwood to The Lord Crewe in Blanchland. He was a lovely man and was quite worried about the level of violence in the two movies – A Fistful of Dollars and A Few Dollars More.

You were involved in the earliest photo sessions with the Tygers of Pan Tang, how did that come about ? I was involved in a show called Bedrock at Radio Newcastle. Back then the radio shut down at 10pm so Dick Godfrey, local journalist, got a remit to play local bands and interviews. It would go on for hours.

The team was Arthur Brown, Ian Penman, myself and Tom Noble who was manager of Tygers of Pan Tang. We took some of the earliest photograph’s of the band at Whitley Bay. I went to Reading rock festival with them, I was their driver and we stayed in the Mount Pleasant Hotel or as it become known the Unpleasant.

Did you get on well with the bands or did any of them give you any grief ? I photographed bands over a long time and I never became really friendly, I wanted to be the fly on the wall. To become too friendly made my job more difficult in a way. I started two magazines and done a lot of interviews backstage at Newcastle City Hall with some ‘famous’ people and early on I realised you don’t gush or pretend to be their best mate.

Looking back Captain Beefheart was a really interesting guy and a good interview and to my surprise when I next met him he picked up the conversation from before, that was very interesting.

I was asked to photograph the Newcastle Jazz festival then started working for Folkworks so the music really changed for me – rock to jazz to folk. I got to know Sting through photographing the big band in the early 70’s. I lived in Jesmond and across the road lived Andy Hudson, conductor of the Newcastle Jazz Big Band. I photographed them in The Guildhall during the first Newcastle Jazz Festival. They used the photo for the cover of their album. I then went onto photograph Stings band, Last Exit and of course The Police.

Motorhead were playing in Newcastle, can’t remember where, but I was going to take some photographs of the soundcheck and I walked into the place and Lemmy was having a meltdown on the stage, a real strop about something. I wasn’t sure what it was about but I got out there quickly.

The first time I cried at a rock concert was when I heard Peter Gabriel sing ‘Biko’ for the first time. A couple of years later I went along with journalist Phil Sutcliffe on a Gabriel tour for a few days doing an in depth story about him for Sounds. I remember playing croquet with Peter at 1am outside our hotel, being a public schoolboy he carried a croquet set around with him on tour.

He was a very nice guy I found him very shy compared to his on stage persona. I did get to know him but always keeping a slight distance. 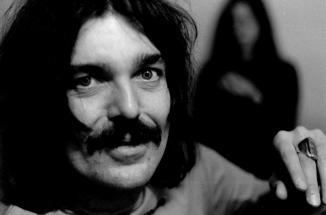 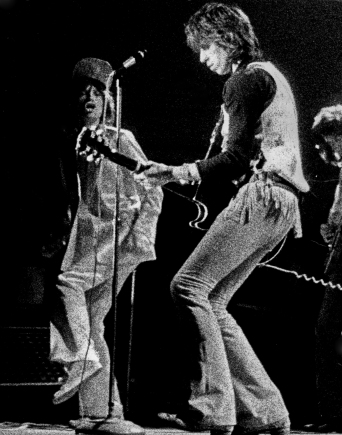 How did you get access to take photographs front row in Newcastle City Hall ? One of the first bands I took photos of was Downtown Faction who were playing in the Polytechnic. Then a few year later I fell in with a guy called Joe Robertson. Joe was an entrepreneur with an office in Handyside Arcade. He opened bars in Newcastle and was very much the man ‘in the know’. He’d seen my photos and one day said ‘I’m going to go into pirate pop posters I will give you £10 for each picture I use and here’s a ticket for the Rolling Stones in 1972’.

So I went on the night but my seat was right at the back so I went to the front and asked the stewards if I could take pictures there and they said fine. So for the next 12 years I never paid to get into the City Hall and most times got in by the stage door as the stewards got to know me. When a punk band was on they even made a cordon around me to stop me getting pogo’d to death.

You worked on some great early photographs of North East bands. Can you remember the sessions with Venom, Raven, Angelic Upstarts or Penetration ? Yes the Venom session was arranged through Dave Wood at Neat records. We went around the back of Neat where there was some wasteland. One of them had white make up and was putting it on as it started to rain so it was just dripping down his face. We hid under a bush until it stopped.

The Upstarts were doing a gig in Tynemouth and Phil Sutcliffe from Sounds was doing an interview with the band. Their manager, who had a fearsome reputation, came up to me and said very calmly ‘Rik, I like you, and I want you to know that if you have any problems me and the lads will sort it out’. I felt that he’d be true to his word.

I photographed Raven just around the corner from here (we’re in Newcastle City Library) at Spectro Arts. That is where they rehearsed I think, I can’t remember taking any live shots of them. Again like a lot of the bands they were nice lads and through Neat records I would get passed from one band to another but always retaining a distance to let them get on and do what they do. 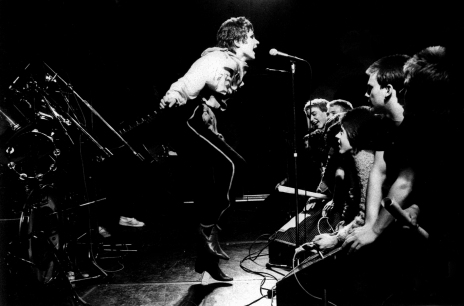 For my entire professional life I’ve been zooming in on things and sometimes you can take away the atmosphere, you might get a great shot of someone in action but miss some surroundings. I got a great shot of Pauline Murray and Penetration, on stage kneeling down surrounded by some punk lads, great shot. Bizarrely before I moved to Canada 2 years ago (one of) the last things I did was to photograph Penetration for the first time in 37 years.

What got you started in photography ? After I left school I worked on a building site as a plumber, I really wanted to be an airline pilot but for various reasons that never worked out either.

My grandfather and father were interested in photography and when my father died, I was only 13, one of the things he left me was a camera. I started taking photos and my then girlfriend’s father was a chemist so I got free developing and printing. She also knew of a Visual Communications course at Sunderland College of Art so I went on that. From that experience I learnt the language needed for design, typography and photography.

At this time I worked alongside another photographer, Ian Dixon, on the Newcastle Festival in 1972. That’s pretty much how it started and then I got a job as photography technician at the polytechnic where I stayed until 1988. Teaching came into it at the college after then and I really enjoyed it.

I worked as photographer at The Newcastle University Theatre, now called Northern Stage, for 15 years photographing the dress rehearsals and getting the prints on the wall for opening night. I realised then that my job was to be in front of the stage recording what was happening. The only person who ruined that was Bob Geldof.

I was photographing The Boomtown Rats in the City Hall and you might remember they done a song called Photograph where they grab someone from the audience and pull them onstage – guess who they grabbed! I was hauled up on stage where I froze. That’s when I realised my place is down there and they do their stuff up here.

Were there any photograph sessions that turned into a nightmare ? No because with music photography there was never any pressure on me, I got in free at the City hall and I enjoyed doing it. Nothing unpleasant from the bands in fact it was The Beach Boys who taught me to frisbee in the Newcastle City Hall. I was there to interview Mike Love for Out Now, a magazine I helped to start. But to my questions I only got 5 yes’s and 2 no’s because the questions were too long and basically contained the answer.

Has photography given you anything unexpected ? I was in the West Bank in Palestine three years ago teaching photography in a refugee camp. Freedom Theatre company runs video, photography and theatre courses, it’s to take people away from the things that are happening around them, and to give them useable skills. The founder was a lovely man, he was a half Arab half Jewish guy that wanted to give people an alternative to what was happening around them. Sadly he was murdered outside the theatre.

Everyday going to work I had to walk across the ground were he was killed. That gives you a profound sense of where you are and who you are. I learnt an enormous amount when I was there and it was an amazing experience, would love to go back.

You know Gary there was no plan, it’s just been a series of bumping into things and one thing leading to another. You can hit a groove you know. I started taking photographs of musicians because I loved music. I didn’t go in thinking I would have a career as a photographer.